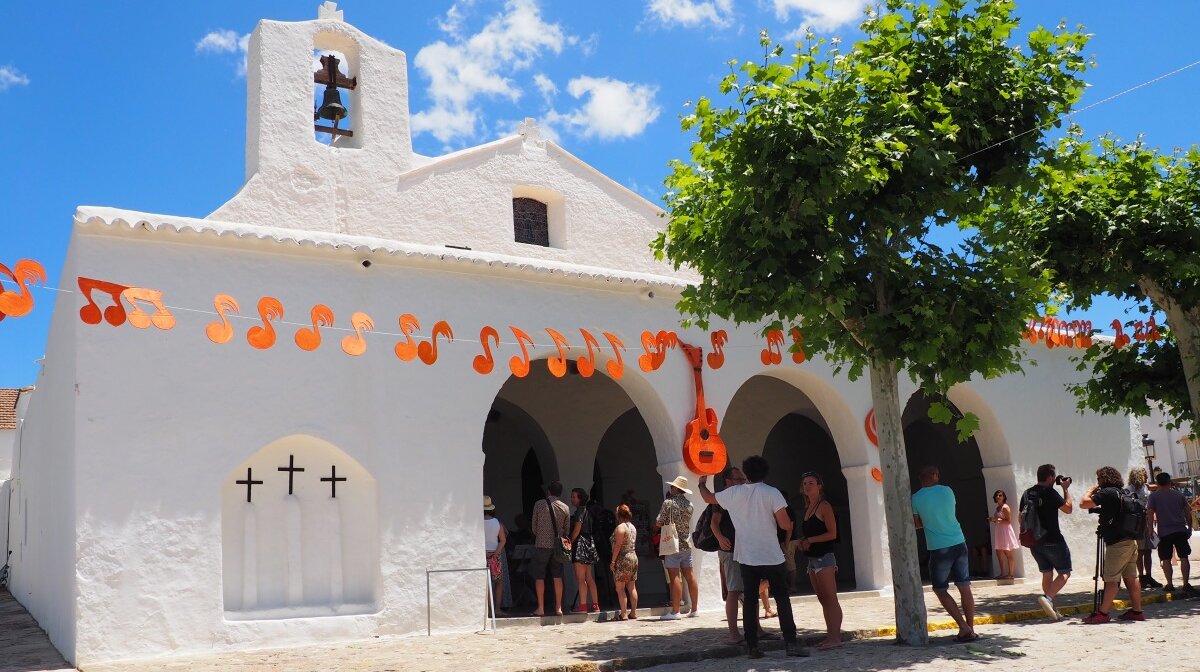 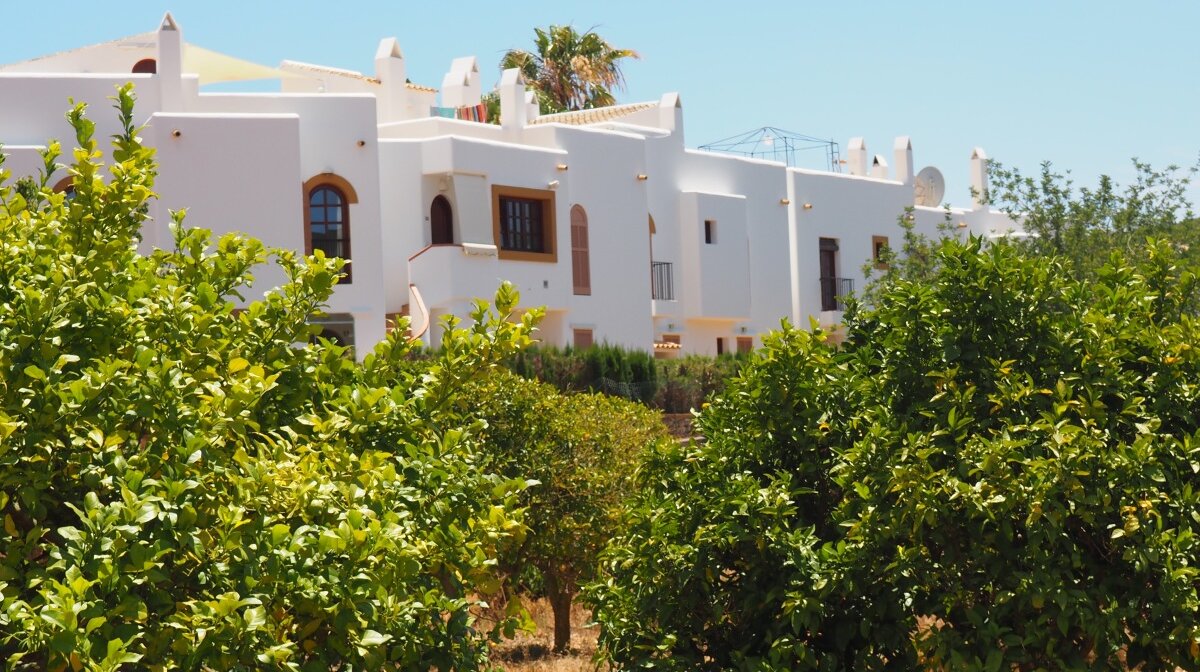 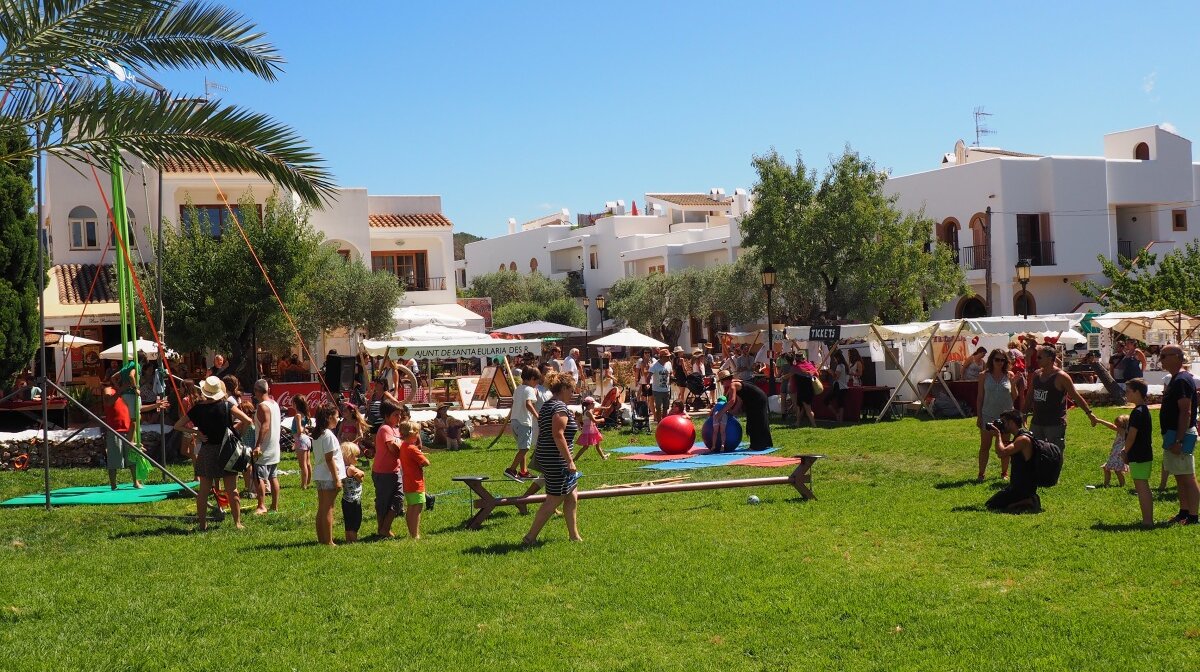 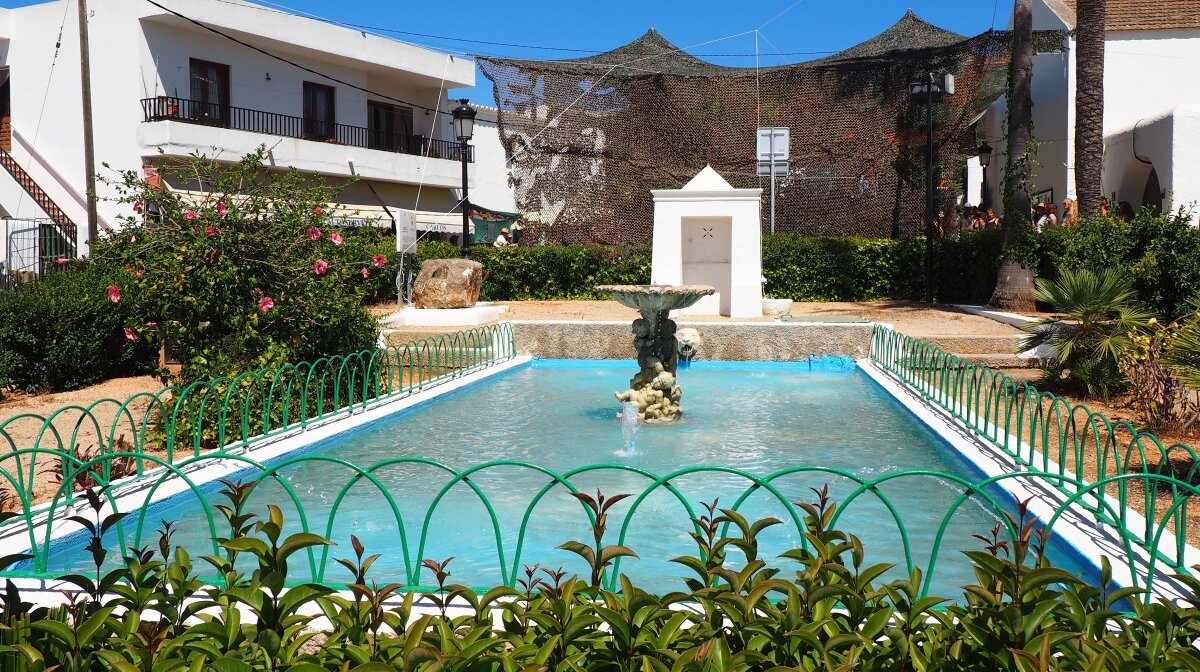 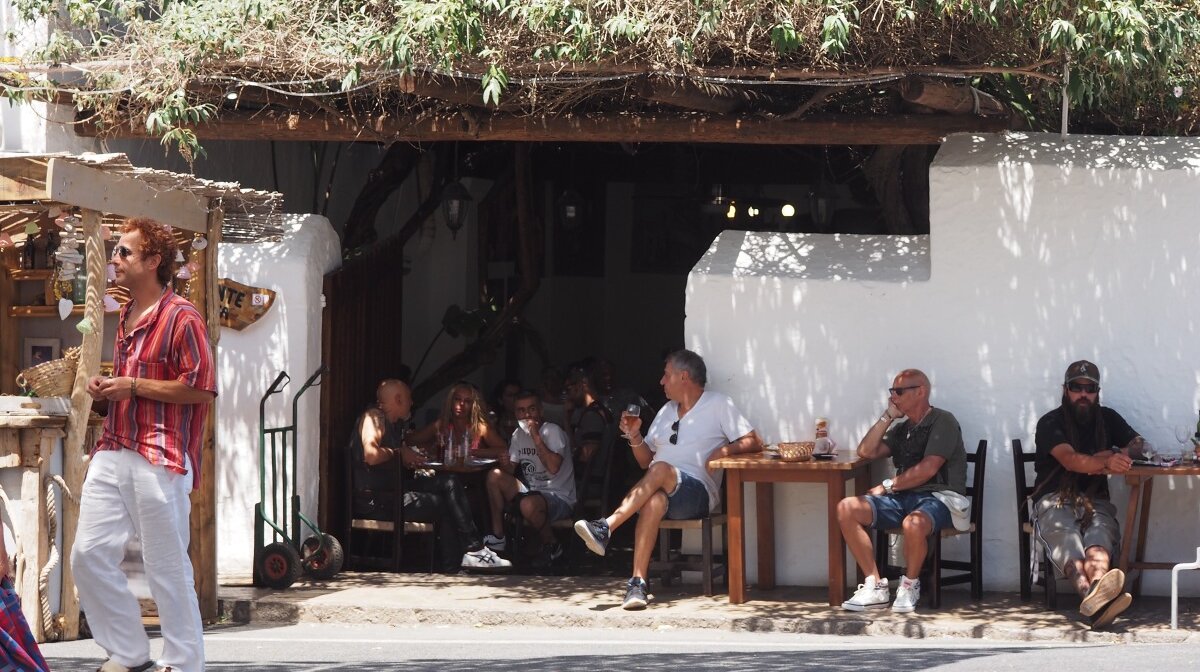 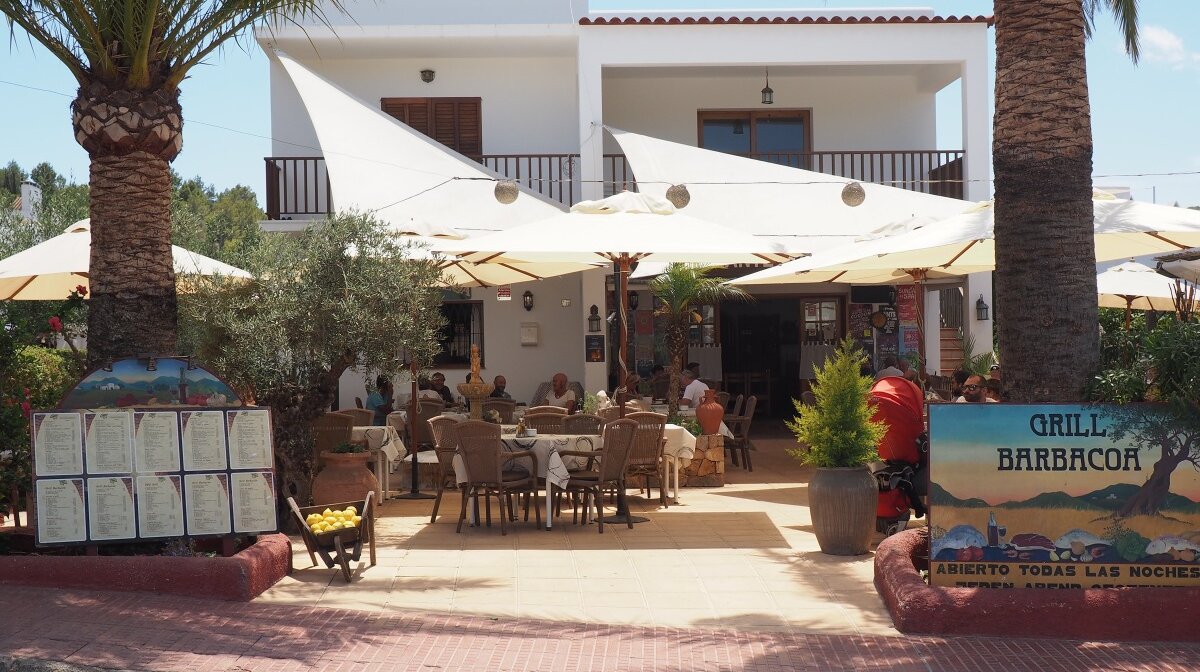 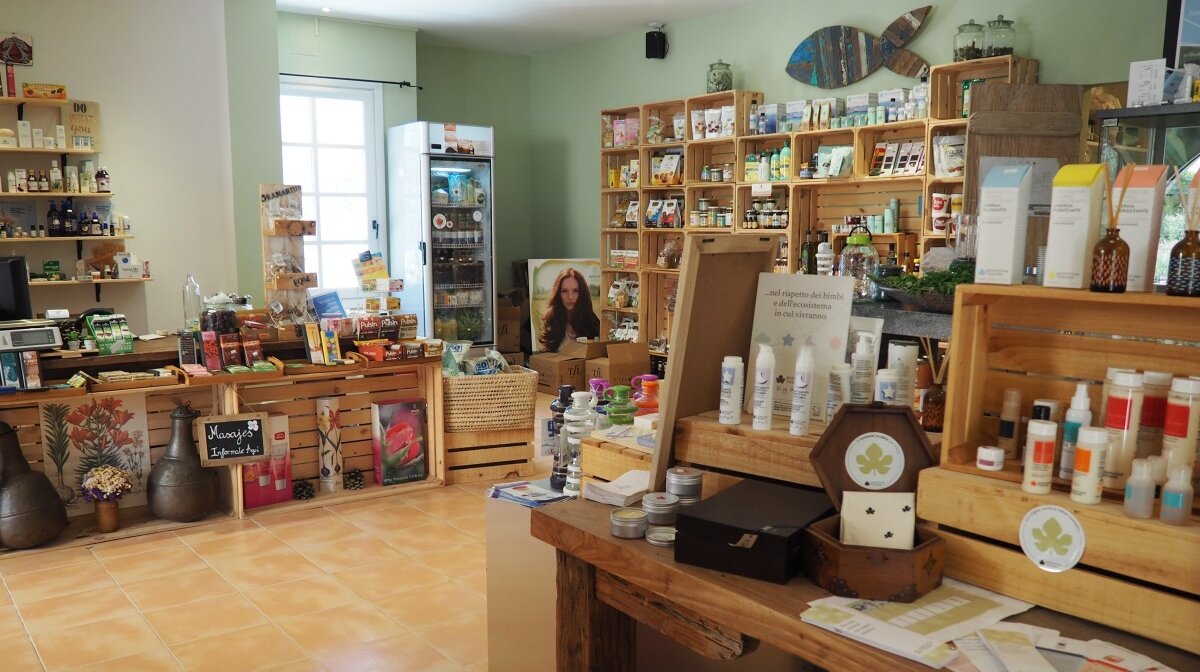 The church at centre of the village

The pretty village of San Carlos

Eat at one of many great restaurants

If you’ve ever dreamed about handing in the keys to your everyday life and moving across the water to the White Isle for a simpler, sunnier lifestyle then a visit to San Carlos will surely push you over the edge.

The idyllic little whitewashed town of San Carlos is hidden in the rural hills and fields of northern Ibiza will have you wanting to sell up and move in asap.

Whitewashed villas and houses with climbing flowers, wrought iron balconies and gardens filled with trailing blossoms and fruit trees. Many of the buildings centre on a large ‘village green’ area, a grassy square in front of the town’s beautiful church, which although distinctly Spanish to look at actually has a very English-country-village feel to it. This central square is the focal point for village daily life and organised events, if you visit during a market day or the annual AiCarai music festival you’ll see how the area takes on a village fete or school fair atmosphere that is incredibly wholesome, especially when compared to the hedonism of the south of the Island.

Located not far from the larger town of Santa Eulalia but feeling a world away from any metropolis San Carlos has been a draw for bohemian travellers, artists, hippies and runaways since the 1960’s. The north of the island’s remote nature coupled with cheap rent on large farmhouses and fincas attracted many of these types and San Carlos became somewhat of a hub for them to gather in. Not least of which because of the legendary Anita’s bar and restaurant which used to serve as a gathering place/post office and bank for those who hadn’t cut mainland ties completely.

Although the hippy centre of the island has shifted slightly south to the Las Dalias Market now, Anita’s still stands in San Carlos and is definitely worth a visit. With it’s reputation preceding it you may be surprised to see what an understated little place it is from the outside but once inside it’s a different story; the art strewn walls whisper stories of people and times that you’ll immediately want to know more about. Take a seat at one of the crowded tables, peruse the rustic menu and don’t leave without trying the local liquor hierbas.

The whole town screams (if it did scream which it doesn’t, more a musical whisper) of this alternative and artistic way of life, even the tabac shop is a part-time art gallery and the streets are dotted with health food shops, organic eateries and juice bars. The shops are all independent boutiques and favour handmade jewellery, quirky accessories and clothing of the boho chic variety.

There are several restaurants besides Anita’s worth trying in the town, the Argentera opposite the church has a huge terrace area and menu serving up cheap snacks - €2.90 sandwiches and hot dogs, or hearty meat and fish mains at an average €14. Their barbecue grill regularly fills the whole area with irresistible mouth-watering smells. Peralta is also worth a stop, its large terrace has sunny or shade options and sits on what passes for the main street, affording great people watching opportunities. The menu hosts tapas plates at €4-6, €5 sandwiches, €17 two course set menus, frosty beers, jugs of sangria and great coffee. Honestly, just try turning a corner in this town without finding a friendly place offering you food and drink with a view.

Take a day trip to San Carlos to experience a slice of the idyllic Ibizan good life, get house envy from the villas, crave country living on the village green, marvel at the characters you’ll pass in the street and nose around in Ibiza’s hippy heritage. Make sure you pay a visit to the village church; a beautiful building with a large shady terrace area and simple internal design.

The village is most lively on a Saturday when the Hippy Market at Las Dalias over-spills to a smaller version in San Carlos, visit that in the morning then make a day of it, spending the afternoon exploring the lush surrounding countryside and stunning beaches between here and Santa Eularia.

If you’re driving the village is well sign posted from Santa Eularia and parking is not a problem. On the buses you’ll find number 16 bus run frequently from Santa Eularia throughout the week, though less often on Saturdays and rarely on Sundays so be sure to check your return times before setting off.