I recently had the opportunity to hop aboard one of Ibiza’s most famous boat party companies, Pukka Up. I was lucky enough to join them for their Friday sunset trip and having heard all about their raging parties, I was pretty excited to get onboard ‘the biggest boat party in the world’.

We met at 5.30pm in San Antonio marina beside two boats that were decked out in bright pink Pukka Up streamers. The hundreds of guests were split between the two boats at random and handed a free glass of fizz as they boarded.

The boat was very simple; a large covered bottom deck with plenty of tables, a bar up front, two toilets at the back and upstairs the open top deck with two rows of chairs, dance floor space and DJ booth. We grabbed a seat at the back of the top deck and started chatting to our neighbours. Between us we were a fairly accurate cross section of Pukka Up clientele; a bunch of Ibiza season workers on a day off in bikinis and denim shorts, fourteen guys on a three-day stag party with a groom dressed as a sea captain, and a group of Irish ladies on weeks holiday sporting a beautiful collection of statement swimwear, body jewellery and full makeup. 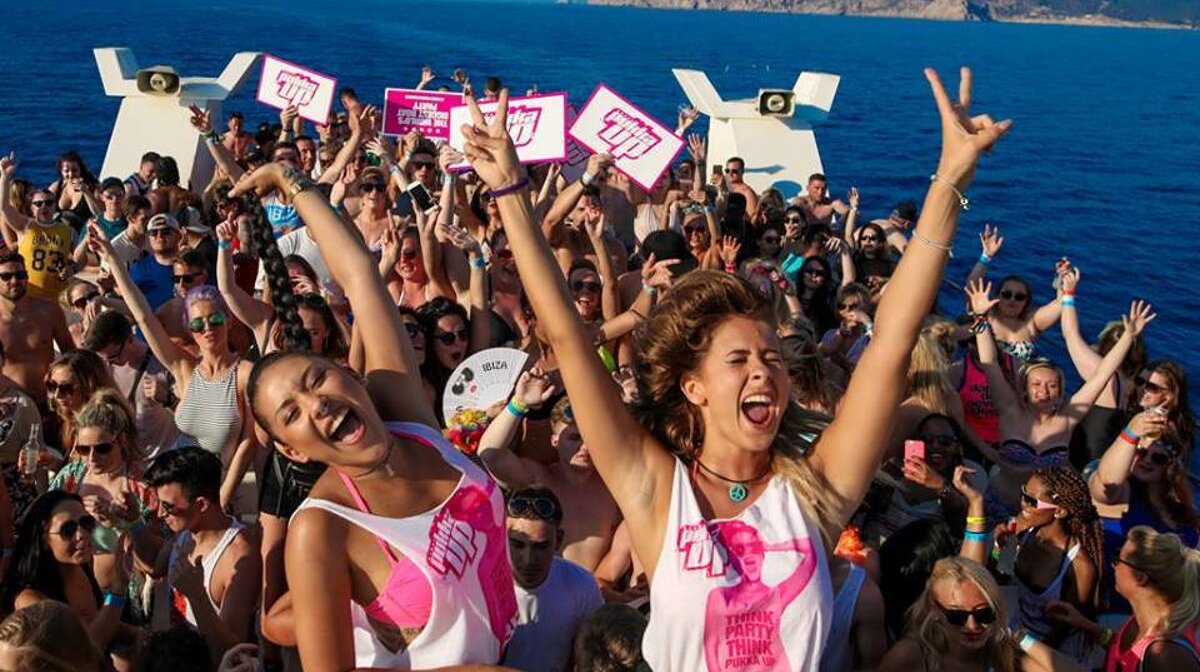 Next, we checked out the bar and found that it was reasonably priced – beer/sangria €4, spirit and mixer €7, shots €4, bottle of champagne €25. Plus ice creams, snacks and soft drinks available. Picking sangria as our weapon of choice we gathered our supplies and headed back up top just as the boat began moving out of the marina.

It turns out all you need for a successful boat party is a reasonably priced bar, a hundred willing drinkers and some tunes pumping out. Throw those ingredients together on a boat or in a back garden and good times will be had almost by accident. What was surprising was that this indeed seemed to be the Pukka Up philosophy. From the moment we set off we were left to our own devices, three quick safety rules were announced over the loud speaker and then nothing from our hosts for the next two hours. In the beginning, however, when the boats set off in complete silence, (no one having explained that the music couldn’t start until we were clear of the marina) there were several worried looking people, the stag party especially who were thinking they’d accidentally got on the wrong boat. 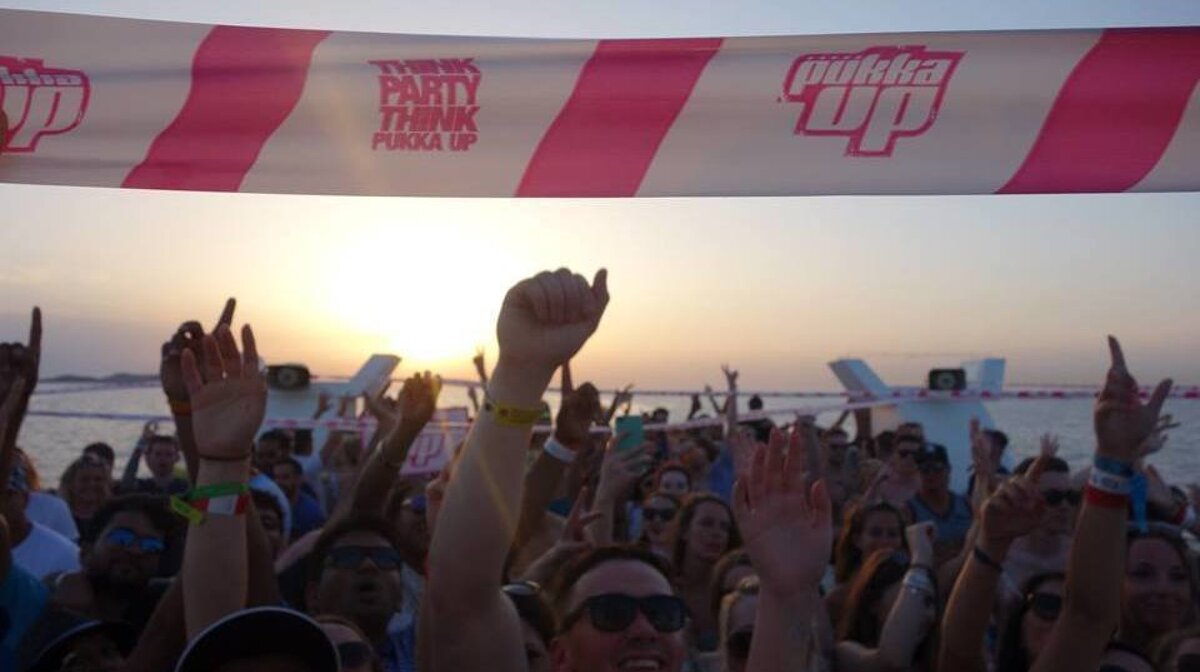 Eventually, the music started and as more and more sangria was drunk the top deck became a dance floor and soon without any real encouragement everyone was having a good time. We did notice that we seemed to be just cruising around the bay in circles with no actual destination but hey, we were dancing on a boat in Ibiza, I guess we didn’t need a destination.

The party progressed like this for an hour or two until some organised and legitimately awesome entertainment turned up in the form of a fly boarder who was beyond incredible. Both boats came to a stop beside each other and he cruised around in between us, leaping swooping, diving and somersaulting like he was born on a hover board, he was spectacular to watch especially when the sun began to set dramatically behind him. 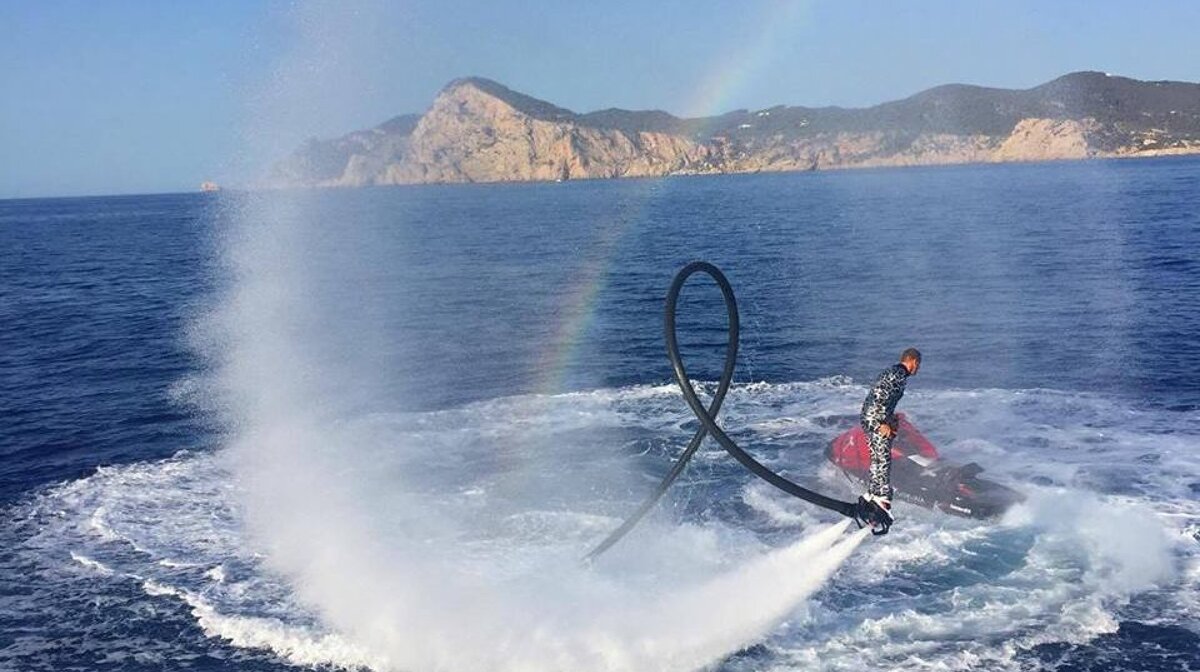 All in all we had a great time, three hours on a boat in the San Antonio bay drinking sangria and partying with strangers is really not a bad way to spend a Friday evening. The sunset over San Antonio bay is a must-see whilst on the island and watching it from the prime location of a boat out in the bay is truly an experience. Although I had been expecting more in terms of organisation and route, maybe Pukka Up are right not to over complicate something that works best when simple. 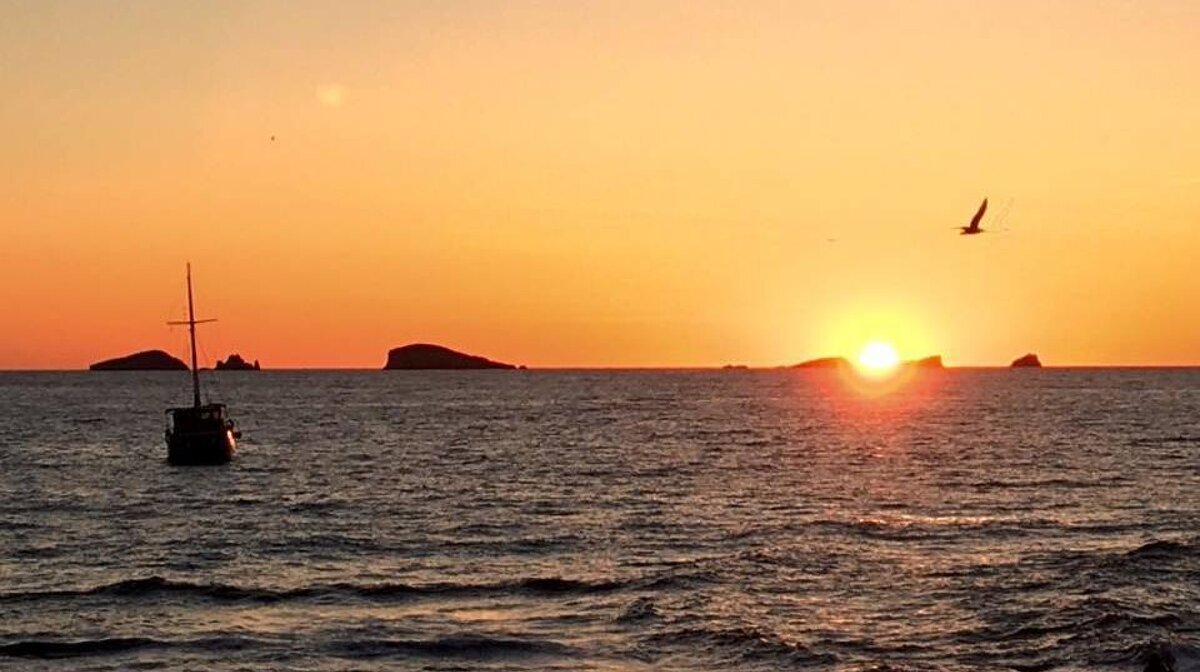 So when you’re booking your boat remember that if you want sightseeing, tour guiding, party games, relaxation or swimming off the boat then this isn’t the one for you, also take their website promises of ‘next level entertainment, confetti cannons and sassy hostesses’ with a pinch of salt, but a Pukka Up boat party is what it is; a simple, no frills, 3 hours of fun with a sunset backdrop.